MIAMI, April 30, 2019 /PRNewswire/ -- For good reasons, the world's most popular tourist destination is Europe. And as cruising's global popularity continues to rapidly grow, more and more people are discovering the best way to visit Europe is on a cruise vacation. 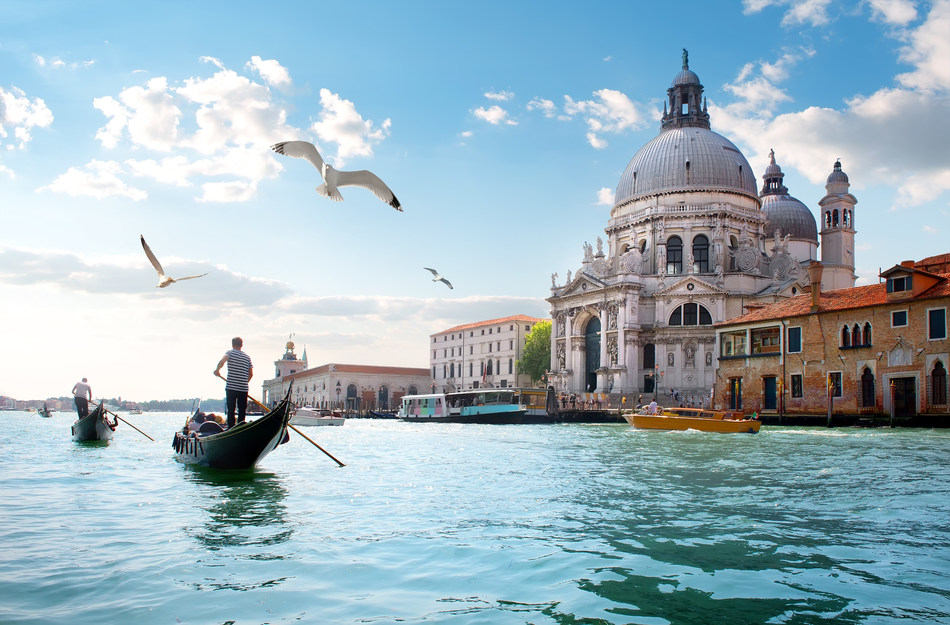 The famous Grand Canal of Venice and iconic gondolas are one of Europe's extraordinary sights, and easily accessible by cruise ship. Photo courtesy of Holland America Line

Not only are cruise vacations generally up to 40% more affordable than comparable land-based vacations, but cruise ships make it easy to see several of Europe's legendary cities in only a few days. Once you are on board, you sail to destinations where you can hang out on legendary beaches and walk the same streets as Mark Antony and Cleopatra. Breathtaking coastlines, charming villages, and places where art and culture thrive deliver a feast for the mind and senses.

The Mediterranean is one of the most popular cruise regions in the world, exceeded only by the Caribbean and Alaska. Many ships sail between Barcelona and Rome, visiting ports in Spain, France and Italy that lead to such attractions as ancient Pompeii, the magnificent art and architecture of Florence and the Roman Colosseum. Or journey to the legendary Greek Isles including romantic Santorini. See the canals of Venice, the Parthenon rising high above Athens and the old city of Dubrovnik – which stars as King's Landing on HBO's Game of Thrones.

Beyond the Med, Europe cruise itineraries explore the modern cities of Scandinavia (such as Copenhagen, Stockholm and Oslo) and St. Petersburg, Russia, with palaces of the Czars among the stunning cultural attractions. On British Isles sailings there may be opportunity to kiss the Blarney Stone and listen to bagpipes on old Edinburgh's Royal Mile. Set sail to Norway to see the magical fjords, and cruise beyond to Iceland and Greenland.

Some travelers do cruise vacations in Europe year after year, exploring the array of creative itineraries and shipboard innovations.

"Traveling on a cruise ship offers the convenience and comfort of a moving resort," says Rory Martin, assistant director of expedition cruising for ultra-luxury line Seabourn, with four ships in Europe this summer. "You don't have to hassle with renting a car and moving from hotel to hotel. And in between the ports there is wonderful scenic cruising. You can sit on your balcony or on one of the top decks and enjoy your passage, as you cruise past untamed coastline and beautiful landscapes."

On select Seabourn sailings, Ventures by Seabourn excursions immerse guests in the destination with kayaking and Zodiac experiences run by a team of expedition experts.

"Imagine being on a Zodiac and listening to an archeologist specializing in Viking history as you make landings at places where the Vikings wandered," Martin says. "You get so close you can touch and feel the environment."

Cruises are a practical, comfortable and economical way to see Europe, whether you travel on a contemporary mega ship, an intimate small- or medium-sized ship or the grand ocean liners of Cunard. There are sailings for all budgets and tastes.

With cruising a fast-growing trend among Americans and Europeans alike, cruise lines tend to show off their newest and most innovative ships in Europe during the prime summer season. This year is no exception.

Holland America Line's Nieuw Statendam, a stylish new ship for foodies and live music lovers and christened earlier this year by Oprah Winfrey, will set sail to the Baltic (which includes Scandinavia and St. Petersburg), Ireland and the Mediterranean, one of six ships the line has exploring Europe this summer.

AIDA Cruises, recently named by Reader's Digest as Germany's most trustworthy cruise company, will have its 13 ships in Europe this season, including the AIDAnova, launched last year as the world's first cruise ship powered with environmentally friendly liquefied natural gas, or LNG, setting a new standard in green cruising.

Italian line Costa Cruises, with 11 ships in Europe, will debut in October the LNG-powered Costa Smeralda, designed to take guests on a "tour of Italy" with onboard areas devoted to the fun, festivity and flavors of the country. The ship will sail one-week cruises visiting Italy, France and Spain.

The seven ships of British line P&O Cruises set sail from Southampton, England, to the Mediterranean, Norwegian Fjords, Baltic, British Isles and other destinations on itineraries that range from "Short Breaks" to in-depth exploration. Some of the ships are family-friendly while others are exclusively for adults – including the Aurora, fresh from a multi-million-dollar upgrade. For P&O Cruises holidays departing after May 2019 tipping is not required on board.

Travel to Europe on Cunard's glamorous Queen Mary 2, which does a regular schedule of transatlantic sailings between New York City's scenic Brooklyn port and historic Southampton. Explore destinations such as Norway, the Baltics, the British Isles and Iceland on the Queen Victoria or the Queen Elizabeth, which returns to Europe in July after first marking the venerable line's return to Alaska for the first time in 20 years.

Princess Cruises has five ships on the continent this summer, sailing to 130 ports, from the far reaches of the Mediterranean to Norway and the northernmost tip of Europe. The line's highly anticipated, MedallionClass Sky Princess debuts in Europe in October.

Carnival Cruise Line will introduce its newest and largest ship, the LNG-powered Mardi Gras, on sailings in 2020 between Venice and Barcelona. In between exciting port visits, guests will be able to ride the first rollercoaster at sea and dine in the first seagoing restaurant developed with legendary chef Emeril Lagasse.

Also, in 2020 Carnival Legend will operate the cruise line's most diverse Europe schedule ever, visiting 34 ports in 14 countries. The totally transformed Carnival Radiance, currently sailing as Carnival Victory, will debut in Europe following a $200 million, 38-day dry dock that will take place in Cadiz, Spain.

Even as cruise ships explore the waters of Europe, they also bring reminders of home. You'll find both local and familiar dining options (you can get a good burger!), fitness centers outfitted with the latest equipment, lavish spas and high-speed Internet access that lets you stay connected – whether you are Instagramming photos of such iconic places as Gaudi's Sagrada Familia church in Barcelona and the Grand Casino in Monte Carlo or just checking in on family and friends.

Among the benefits of cruising is you only have to unpack once and have the luxury of a room steward who tidies up your cabin twice a day, leaves chocolates on your pillow and makes you feel like a VIP. You don't have to worry about local currency fluctuations because you've paid upfront for your accommodations, cuisine, entertainment and activities, for kids and adults alike.

Onshore, there's opportunity to soak in the sun on glistening beaches, visit world-class museums, shop for souvenirs and the latest European fashions, visit cafes and learn about lost civilizations. Many passengers book their shore excursions before boarding their ship, with extensive options to choose from, featuring knowledgeable English-speaking guides that provide plenty of local insight to help you fully appreciate the Europe you've come to see.