A Sure Bet: Cruise Ship Casinos Pay Off with Jackpots, Friends and Making Guests Feel at Home

, /PRNewswire/ -- When Texan gets on a ship she has a plan: Get to the casino as soon as it opens. She does not gamble on land. But in cruise ship casinos, she's a big player, and receives all the perks that go along with that status. 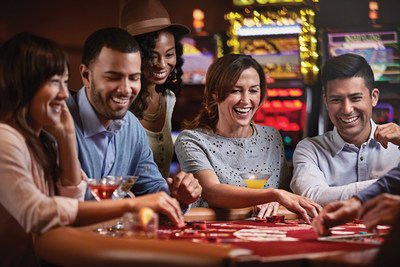 " just makes it so much fun," Ostrokol says. "I do love slot machines, and I play them all. And the casino team takes really good care of me."

of , says arriving at a ship casino is akin to coming home. He and fellow players communicate through a dedicated Casino Fan Facebook page.

"We go in there and meet other friends we cruise with from all over the U.S.," Simpson says. "There's always somebody we know, people from , , . And there's not a ship that we go on that we don't know the casino team."

Unlike with casinos on land, cruise guests are typically on board for a week or more, time for relationships to develop.

"We offer them a warm and friendly environment where they can interact with fellow cruisers," says , senior vice president of global casino operations for . "And we have an engaging casino team that takes the time to understand guest needs. We want to ensure that we are different from a typical casino in that way."

Since joining from in 2012, Goldman has overseen tremendous growth in the casino realm – as the world's largest cruise company has expanded its gaming operations around the world.

Casino play is popular on all the cruise lines under the banner. In addition to , this includes , Holland America Line, Cunard, Seabourn, German line , Italian line , British line and P&O Cruises Australia.

Across the fleet, the most popular gaming option is slots, with Americans and Australians particularly big fans. With more than 100 casinos, sees a guest spinning the reels on a slot machine 112 times per second, making it by far the most popular form of gaming.

Tournament play is tremendously popular on ships in , and has plans to expand slot tournaments elsewhere around the world.

The company paid out more than in tournaments in the past year. This includes special branded events with tie-ins to Wheel of Fortune and Monopoly, the latter being for the biggest prize money the company ever paid. With guests flocking to these events, they will be expanded across the fleet, with a marquee Spin & Sail event on in 2019.

Though blackjack is preferred in , the casinos cater to a wide array of tastes for games offering roulette, baccarat and a variety of poker games in different markets.

Goldman says the gaming crowd appreciates innovation, so his team is always on the lookout for what's new and what people want to play on a regional basis.

Among options trending now are arcade-style games for adults and lottery-style scratch tickets.

"We are always looking at what else may be popular," Goldman says. "We want to appeal to as broad an audience as possible."

For frequent players, is "unlike anything else anywhere on land or sea," Goldman says. Players clubs are also available on , and expanding to some of the corporation's international brands.

Based on play, perks for players include everything from complimentary drinks to free cabins. Special events see top players invited to participate in unique and exciting experiences, which elevates the energy in the casino for all guests.

"People like engaging with other people who play," says Goldman.

Behind the scenes, a new casino management system will allow more customized incentives for players.

"We will be able to offer an incentive based on what you are playing in real time," Goldman says.

As it looks to expand its audience, has strategic partnerships with casinos on land, with qualified players offered a certificate for a free cruise. This enables the cruise company to draw new-to-cruise players to its casinos.

There are some differences in cruise ship play. With a more relaxed atmosphere, game table minimums are typically lower, for instance. While they vary by ship, itinerary and even time of day, it's rare to find a minimum over .

In the friendly, guest-centric environment waging limits are adjusted based on a player's personal preferences. "We have some very high limit players, not much different than you would see with land-based casinos," Goldman says.

With nearly 60 cruises under her belt since 2002, Ostrokol has stories to tell – like the time earlier this year when she won on a slot machine on the Carnival Vista, a ship with more than 250 machines.

"I thought I had won , and said, 'Okay, I can play tomorrow.' When I realized it was more, I screamed," she says, laughing. She used her payout for a down payment on a wheelchair accessible van.

Simpson, a blackjack player who occasionally dabbles in slots, plays a few times a year in , but says ships are decidedly friendlier places. His biggest shipboard win was a blackjack hand, "on the Lucky Ladies." He also won a slot tournament on the Carnival Breeze.

"The best way to describe what time of day you can find me in the casino, is whenever it's open," Simpson says with a laugh. He's been known to play well into the night and hit a ship's 24-hour pizzeria to watch the sunrise.

Simpson says in addition to gaming, he enjoys specialty dining, such as La Cucina for Italian and Gigi's for pan-Asian cuisine.

And then there are all the additional virtues of cruising. In traditional gaming resorts, you are in one place with one focus. On cruise ships, gaming comes with a wealth of other fun entertainment and activities – including visiting several exciting destinations during your vacation.

offers a variety of casino experiences, whether guests want to dress up like or go completely casual. There are classic casinos on and in the , and smaller, more intimate experiences on ultra-luxury line Seabourn. You can even play while crossing the Atlantic on a luxurious Cunard ocean liner.

"From a casino perspective, we can offer something for everybody, every day, all across the globe, which no one else can do," Goldman says.

On ships, blackjack players older than 60 are twice as skillful as players younger than 30.

In the largest annual tournaments, on and , players vie for a share of a pot.