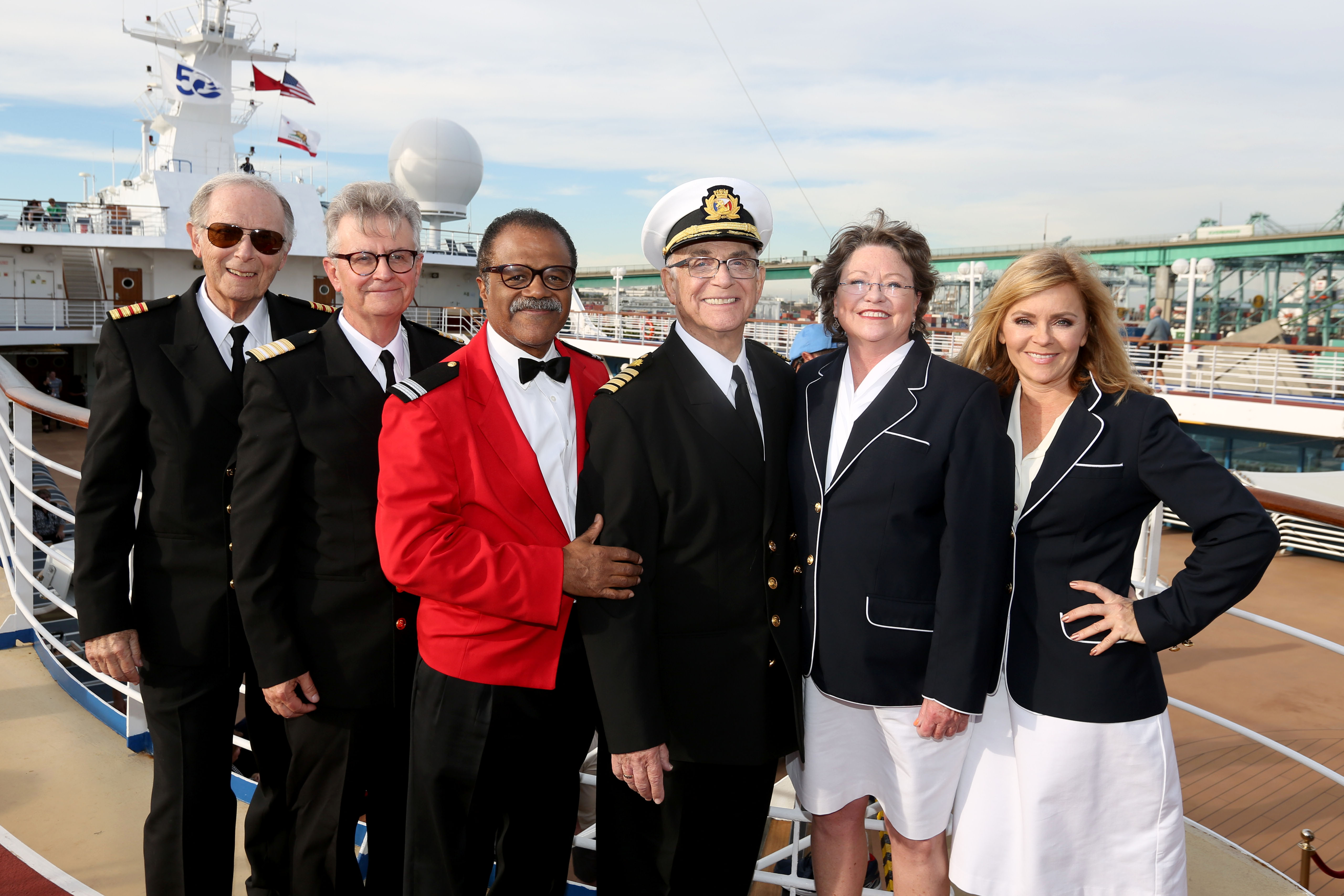 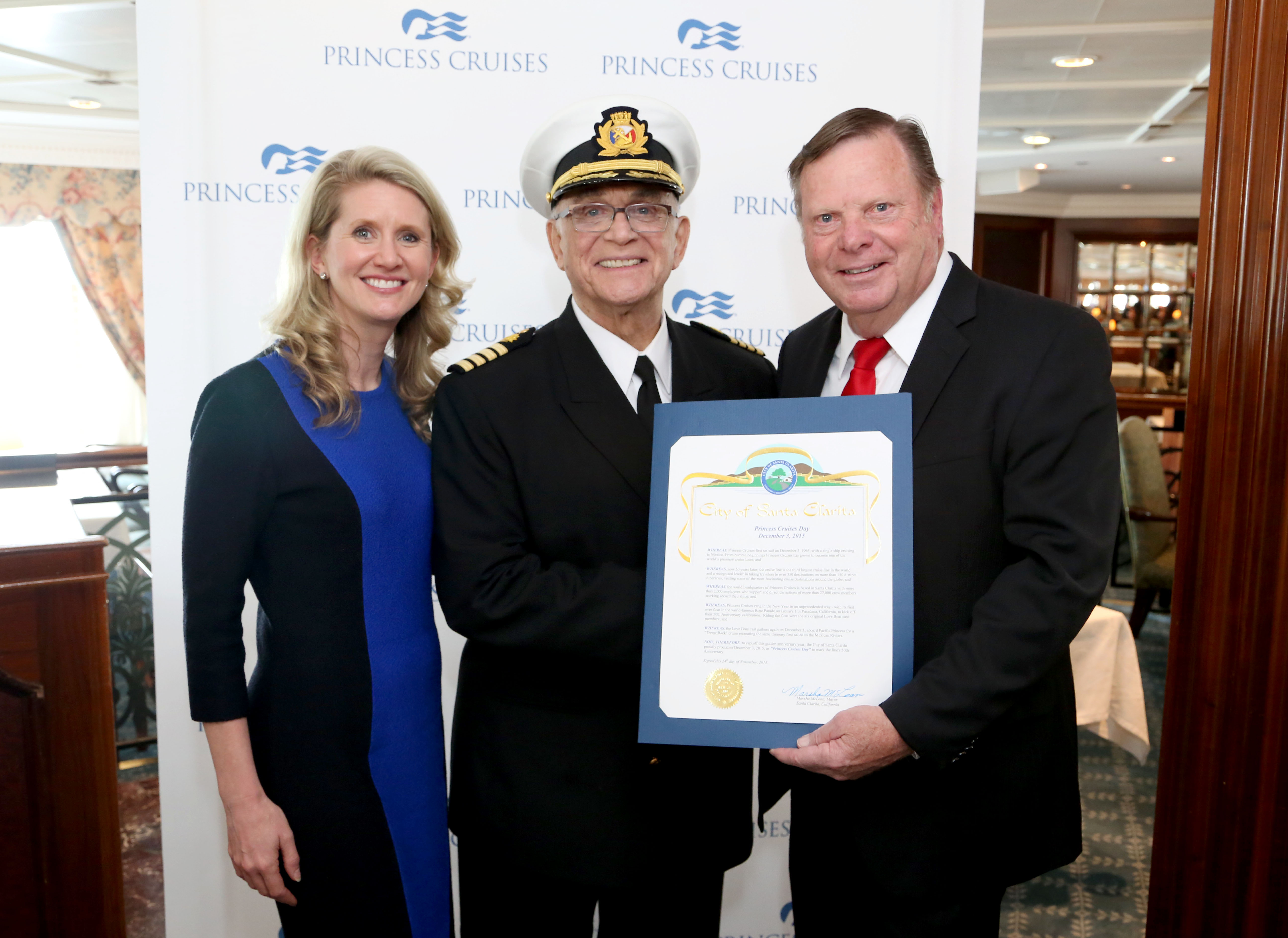 
SANTA CLARITA, Calif. (December 3, 2015) – It all began on this day 50 years ago with a cruise to Mexico on a single cruise ship, Princess Patricia. Today, Princess Cruises celebrated its 50th anniversary aboard Pacific Princess in the Port of Los Angeles with a special appearance by the original “Love Boat” cast before setting sail on a throwback cruise, recreating the very first itinerary to the iconic Mexican Riviera.

Now 50 years later, Princess Cruises is the third largest cruise line in the world with a fleet of 18 cruise ships and a recognized leader in taking 1.7 million travelers each year to some of the most fascinating cruise destinations around the globe.

The County of Los Angeles and the City of Santa Clarita, the hometown of Princess Cruises world headquarters, also marked the occasion by proclamation declaring December 3 “Princess Cruises Day”.

“We’ve had so much to celebrate this year – from our first-ever float in the iconic Rose Parade on New Year’s Day, to our exciting new partnerships with Broadway legend Stephen Schwartz, award-winning chef and restaurateur Curtis Stone and the introduction of our Discovery at Sea program,” said Jan Swartz, Princess Cruises president. “Today, it’s fitting that ‘The Love Boat’ cast is here with us to celebrate our 50th anniversary since they played a key role in the success of our company.”

The pilot episode of “The Love Boat” was shot aboard the 730-passenger Sun Princess, with Pacific Princess and Island Princess then becoming the primary floating stars of the show. Later episodes and specials were filmed aboard many other Princess cruise ships in destinations around the globe. The show, which aired from 1977 to 1986, went on to become one of the highest-rated and longest-running and beloved shows on television, introducing viewers to modern day cruising and, in the process, making Princess Cruises and its ships synonymous with vacations at sea.

“People always ask us why ‘The Love Boat’ was so popular and I always say it’s because it gave people something to dream about,” said Gavin MacLeod. They could dream about being out on the open seas on a cruise and discovering the worlds’ greatest destinations, dreaming about love and of course happy endings since the shows always ended on a high note. I’m proud to have played a role in the growth of the cruise industry – to see where these ships have come from the days we filmed aboard the original Pacific Princess to now experiencing the 18 magnificent ships in the fleet.”

Today more than 30,000 employees both ashore and at sea continue to offer guests enriching vacation experiences by connecting them with each other, different cultures and nature in a brand new way.

“We celebrate our successes over the last 50 years and I know our future is bright as we chart a course for the next 50 years,” added Swartz.

Princess Cruises has been celebrating its 50th anniversary all year long with an incredible lineup of new dining, shopping and entertainment aboard its ships. The festivities will continue through April 2016.

Additional information about Princess Cruises is available through a professional travel consultant, by calling 1-800-PRINCESS (1-800-774-6237), or by visiting the company's website at princess.com.

About Princess Cruises:
One of the best-known names in cruising, Princess Cruises is a global cruise line and tour company operating a fleet of 18 modern cruise ships renowned for their innovative design and wide array of choices in dining, entertainment and amenities, all provided with the experience of exceptional customer service. A recognized leader in worldwide cruising, Princess carries 1.7 million guests each year to more than 360 destinations around the globe on more than 150 itineraries ranging in length from three to 111 days. The company is part of Carnival Corporation & plc (NYSE/LSE:CCL; NYSE:CUK).