, /PRNewswire/ -- Let's play Family Feud Live!™ today announced it will debut the seagoing version of the iconic TV game show Family Feud™ as part of the entertainment lineup on the highly anticipated , when it enters service in 2020. 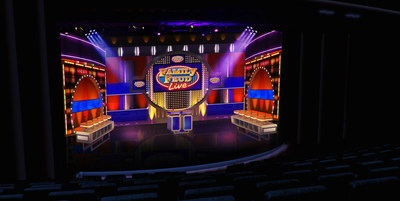 An exclusive partnership with Fremantle, Family Feud Live aboard will feature the same format and signature set as the TV show. Two five-person teams will battle it out in rounds including Face Off and Fast Money by naming the most popular answers to survey questions for a chance to win a host of prizes in a high-energy gameplay.

" is all about fun, family and friends just like Family Feud," said , president of . "As we continue to build diverse entertainment lineup, we are excited about offering this iconic game show onboard and involving our guests in a great new way to Choose Fun."

, president of commercial operations for Fremantle, added, "Our show has been wildly successful for more than 40 years, but it's never been showcased at sea, so this is an unbelievably exciting opportunity for us. Carnival's audience is perfectly aligned with our show, and we cannot wait to give guests the chance to play Family Feud Live."

The onboard version of Family Feud Live on will be hosted by the ship's cruise director. Several variations of the show will be played and designed to be both family-friendly and adult-oriented. Family Feud Live will be just one of the many all-ages entertainment offerings presented in Grand Central zone and other new venues.

is Carnival's most innovative ship with such groundbreaking experiences like BOLT, the first roller coaster at sea, as well as Emeril's Bistro 1396, the first seagoing restaurant by famed chef Emeril Lagasse that will be housed in the ship's French Quarter, one of six themed zones on board. will also be the first cruise ship in to be powered by (LNG), part of "green cruising" platform.

Currently under construction at the Meyer Turku shipyard in , is slated to enter service in , before repositioning to for a series of voyages then shift to Port Canaveral for year-round seven-day cruises beginning in .

About Fremantle
Fremantle is one of the largest and most successful creators, producers and distributors of scripted and unscripted content in the world. A global entertainment powerhouse, Fremantle has an outstanding international network of production teams, companies, and labels in over 30 countries. Fremantle produces more than 12,000 hours of original programming, roll out more than 60 formats and air 450 programs a year worldwide. The group distributes over 20,000 hours of content in more than 200 territories. Fremantle is also a world leader in digital and branded entertainment, with more than 300 million subscribers across 1,400 social channels and over 100 billion views across all platforms.

Fremantle is part of , a global leader across broadcast, content, and digital, itself a division of the international media giant .

For more information, visit www.fremantle.com, follow us @FremantleUS or visit our  and Linkedin pages.