Guests sailing on the August 5-12 Transatlantic Crossing aboard flagship Queen Mary 2 offered auction highlights in advance of the September public auction
VALENCIA, Calif., April 7, 2022 /PRNewswire/ -- Luxury cruise line Cunard announced today that the company will once again partner with Julien's Auctions, the world-record breaking auction house to the stars, on an exhibition preview of the Property from the life and career of Betty White. White passed away on December 31, 2021 at the age of 99 years old in Los Angeles. 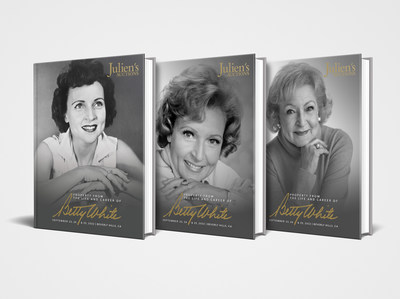 Betty White epitomized warmth, grace and class, and our guests are keen to learn about the life of this beloved icon
During the August 5th Transatlantic Crossing aboard flagship Queen Mary 2, guests will enjoy a sneak-peek preview of the auction's highlights, and have the special opportunity to bid on select items prior to the official three-day auction event on Friday, September 23rd, Saturday, September 24th and Sunday, September 25th, 2022 at Julien's Auctions in Beverly Hills and online on juliensauctions.com.
The auction and exhibition will be an exclusive presentation and celebration of the legendary actress and cultural icon's extraordinary life and eight decade spanning career.
On offer is an exclusive collection of over 1,500 lots featuring the Hollywood icon's awards, scripts, wardrobe and memorabilia from her iconic television shows and films, as well as furnishings, artwork, fine jewelry, household and personal items from her beloved homes in Brentwood and Carmel, California.
"We are delighted to once again collaborate on a Transatlantic Crossing with our longtime partner, Julien's Auctions, and privileged to bring our guests such a special enrichment opportunity," said Jamie Paiko, vice president of Sales for Cunard North America. "Betty White epitomized warmth, grace and class, and we know our guests will be keen to learn more about the illustrious life of this beloved icon."
During the seven-night Transatlantic Crossing, guests will enjoy:

"Betty White was a beloved national treasure and a cross generational icon who made us laugh for eighty years with her illustrious work on film, radio and television classics such as The Mary Tyler Moore Show and The Golden Girls," said Darren Julien, President/CEO of Julien's Auctions. "We are honored to work with her Estate in this exclusive presentation of these precious artifacts and personal mementos from her storied life and career which will be offered for the first time at auction to the public, museum curators and her legions of fans worldwide."
American actress, comedian, television pioneer, producer, animal advocate and author, Betty White was one of the most beloved entertainers of the 20th and 21st centuries.  Among her voluminous career achievements, she became the first woman to produce a sitcom, Life with Elizabeth, in which she also starred.  With her company Bandy Productions, she became one of the rare women with power in Hollywood during the early days of television. She starred in two iconic television series,' the Mary Tyler Moore Show and the Golden Girls, winning Emmy® Awards for both. White's superstardom and career surged and gained even more momentum in her later years when she starred in the film The Proposal with Sandra Bullock and Ryan Reynolds and in the TV series Hot in Cleveland.
At the age of 88, White's ubiquitous celebrity presence and persona on social media, film and television made her an even bigger pop culture icon, as she became the subject of a viral fan-based Facebook campaign to host Saturday Night Live where her appearance on May 8, 2010 (as the oldest person to ever host SNL) garnered 12 million viewers and her fifth career Emmy award win. She also appeared in a Snickers Super Bowl commercial, guest appeared in My Name Is Earl, 30 Rock, Community, The Middle, and received more Emmy® nominations as the host of the reality show Off Their Rockers.
A lifelong animal lover and advocate, White would often quip that she "had to do her show business to keep up with her animal business."  Her work to raise awareness and funds for animal wellness included involvement with both the LA Zoo and Morris Animal Foundation as a board member and trustee, along with participation in several other charities around the world.
She was also the author of several books including her 2010 memoir Here We Go Again: My Life in Television; the 2011 New York Times bestseller If You Ask Me: (And Of Course You Won't); Betty & Friends: My Life at the Zoo; Betty White in Person and Together: A Shared Vision and The Leading Lady: Dinah's Story, both co-written with Tom Sullivan, and more.
Highlights of Betty White's collection include (with estimates):

For more information about Cunard, or to book a voyage, contact your Travel Consultant, call Cunard Line at 1-800-728-6273 or visit www.cunard.com.
For Travel Advisors interested in further information, please contact your Business Development Manager, visit OneSourceCruises.com or call Cunard at 1-800-528-6273.
About Cunard
Cunard is a luxury British cruise line, renowned for creating unforgettable experiences around the world. Cunard has been a leading operator of passenger ships on the North Atlantic, since 1840, celebrating an incredible 182 years of operation. A pioneer in transatlantic journeys for generations, Cunard is world class. The Cunard experience is built on fine dining, hand-selected entertainment and outstanding service. From five-star restaurants and in-suite dining to inspiring guest speakers, the library and film screenings, every detail has been meticulously crafted to make the experience unforgettable. Destinations include Europe, the Caribbean, the Far East and Australia.
There are currently three Cunard ships, Queen Mary 2, Queen Elizabeth and Queen Victoria and a fourth ship, Queen Anne, will be entering service in early 2024. This investment is part of the company's ambitious plans for the future of Cunard globally and will be the first time since 1999 that Cunard will have four ships in simultaneous service.
Cunard is based at Carnival House in Southampton and has been owned since 1998 by Carnival Corporation & plc (NYSE/LSE: CCL; NYSE:CUK).
Social Media
Facebook: www.facebook.com/cunard
Twitter: www.twitter.com/cunardline
YouTube: www.youtube.com/wearecunard
Instagram: www.instagram.com/cunardline
Media Assets (for media only)
Cunard photography is available online at https://cunard.assetbank-server.com
Email: press@cunard.com
Password: Cunard1
For additional information about Cunard, contact:
Jackie Chase, Cunard, 310-926-7686, jchase@cunard.com
About Julien's Auctions
Julien's Auctions is the world record-breaking auction house to the stars. Collaborating with the famous and the exclusive, Julien's Auctions produces high profile auctions in the film, music, sports and art markets. Julien's Auctions has received international recognition for its unique and innovative auction events, which attract thousands of collectors, investors, fans and enthusiasts from around the world. Julien's Auctions specializes in sales of iconic artifacts and notable collections including Marilyn Monroe, John Lennon, Ringo Starr, Lady Gaga, Banksy, Cher, Michael Jackson, U2, Barbra Streisand, Les Paul, Neil Young, Elvis Presley, Frank Sinatra, Jimi Hendrix, Hugh Hefner and many more.
In 2016, Julien's Auctions received its second placement in the Guinness Book of World Records for the sale of the world's most expensive dress ever sold at auction, The Marilyn Monroe "Happy Birthday Mr. President" dress which sold for $4.8 million. Julien's Auctions achieved placement in the Guinness Book of World Records in 2009 for the sale of Michael Jackson's white glove, which sold for $480,000 making it the most expensive glove ever sold at auction. In 2020, Julien's Auctions received its third Guinness Book of World Record placement for the sale of Kurt Cobain's "MTV Unplugged" 1959 Martin D-18E acoustic-electric guitar, which sold for $6 million making it the world's most expensive guitar ever sold at auction. Based in Los Angeles, Julien's Auctions has a global presence bringing their auctions and exhibitions to targeted destinations worldwide including London, New York, Las Vegas, Japan and China. Live auctions are presented for bidders on-site and online via live streaming video and mobile technology. For more information on Julien's Auctions, go to www.juliensauctions.com. Connect with Julien's Auctions at www.facebook.com/JuliensAuctions or www.twitter.com/JuliensAuctions or www.instagram.com/juliens_auctions.